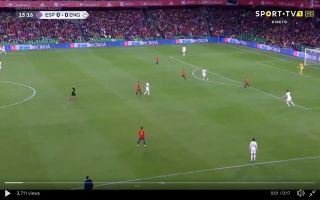 Manchester City winger Raheem Sterling fired England into the lead against Spain in the 16th minute of this evening’s matchup after a great assist from Manchester United’s Marcus Rashford.

Sterling produced an excellent finish to smash the ball past David De Gea who could do nothing to prevent the ball from hitting the back of the net.

Sterling’s goal this evening was his first for the Three Lions since October 2015. It was well worth the wait.

Check out the video of Sterling’s excellent finish below:

God can save the Queen, but not this shot from Sterling … pic.twitter.com/4RBgKm0UdH

England look like rejuvenated side under Gareth Southgate and fans are hoping the national team’s success continues for a long time to come.