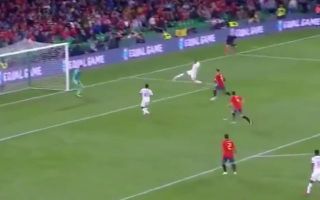 England put on a ruthless display in the first half against Spain in Seville on Monday night with Raheem Sterling helping himself to a double.

The hosts were left shell-shocked as Gareth Southgate’s men put on a clinical display with three well-taken goals to take full control of the encounter.

After Sterling had broken the deadlock after just 16 minutes, Marcus Rashford doubled the lead for the visitors to give them real hope of returning home with all three points.

They weren’t finished there before the half-time interval either, as seen in the video below, with Sterling pouncing on a squared ball from Harry Kane to double his tally for the night.

However, Chelsea midfielder Ross Barkley deserves credit for his contribution in the build up to the goal as his wonderfully weighted pass over the top caught the Spanish backline out and allowed Kane to make the simple pass for Sterling to tap home.

Ross Barkley with a peach to start this! Folks, he’s starting to actually look good. pic.twitter.com/ecYgcdWUMX