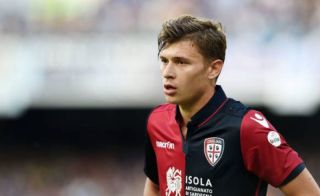 As he continues to impress for club and country, Nicolo Barella will reportedly now cost in excess of €40m with AC Milan, Inter and Roma linked with a swoop.

The 21-year-old bagged six goals in 34 Serie A appearances last season, while his all-action and combative style of play ensured that he added a real balance to Cagliari’s midfield.

He’s continued that influential role this season to emerge as a stand-out talent in Italy’s top flight, while also earning his first two caps for Italy having impressed coach Roberto Mancini enough with his domestic form to get a call-up.

That in turn says a lot about the quality that he possesses, and given his age, he undoubtedly has plenty of room for improvement and development in the coming years.

With that in mind, it’s no real surprise that AC Milan, Inter and Roma are all being linked with a move, as per Sportmediaset, although it’s added in the report that his ongoing impressive form is having an influence on his price-tag and it will now take over €40m to prise him away from Sardinia.

There is an argument to suggest that Milan are most in need of midfield reinforcements, particularly when considering coach Gennaro Gattuso continues to rely heavily on his preferred trio of Giacomo Bonaventura, Lucas Biglia and Franck Kessie.

Inter boss Luciano Spalletti has options as his side compete on multiple fronts this season having signed Radja Nainggolan this past summer, while Roma brought in Steven N’Zonzi to bolster that area of their squad.

Nevertheless, all three Italian giants are specifically mentioned as being interested in Barella, and so time will tell if he can maintain his progress this season to eventually earn a big move next year.