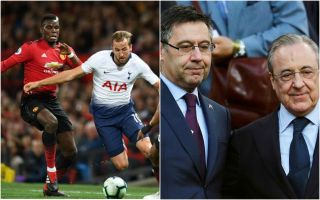 Real Madrid and Barcelona can reportedly beat other clubs to the transfer of Tottenham star Harry Kane due to a special clause in his contract.

According to a big claim made by Spanish outlet Don Balon, Kane has a clause in his Spurs contract that allows him to leave if either Real or Barca offer £175million for him.

The England international is mentioned in the report as being a target for Madrid, who certainly look in need of a goal-scorer of his quality in their squad right now.

Real have made a poor start to the season since two big departures from the club in the summer – top scorer Cristiano Ronaldo, and manager Zinedine Zidane.

Los Blancos have brought in Julen Lopetegui as their new manager, but didn’t do enough in the transfer market to replace Ronaldo.

Mariano Diaz rejoined the club after impressing at Lyon, but is not quite in the same calibre as someone like Kane.

The 25-year-old has been one of the stars of the Premier League in recent times, scoring at a highly prolific rate for both Tottenham and England.

Harry Kane to one of La Liga’s big two?

It seems likely he could do the job at the Bernabeu or indeed at the Nou Camp, though it seems it is the team from the Spanish capital most interested in signing him, if Don Balon’s report is anything to go by.

Still, any other top sides in England or elsewhere would be at a disadvantage in any transfer battle as it seems Kane has a deal in place to give Real Madrid or Barcelona a major edge in terms of striking a deal, though they’ll have to pay up.