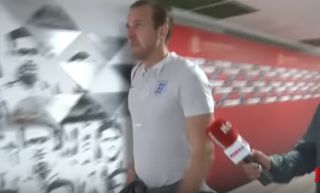 Tottenham striker Harry Kane was perhaps unsurprisingly asked about a transfer to Real Madrid after helping England to victory in Spain last night.

Gareth Southgate’s side put on a fine performance to beat Luis Enrique’s men 3-2 in Seville, and a Marca journalist approached Kane about a possible move to Madrid afterwards.

MORE: Tottenham star singled out for praise in England’s win over Spain

Don Balon are among the outlets to recently link the England international as a target for Los Blancos, who could do with his goals after losing Cristiano Ronaldo in the summer.

Kane, however, seemed to distance himself from the speculation, simply saying: “Not today”.

It’s not clear if the 25-year-old meant he wouldn’t be moving today or discussing it today, but Spurs fans can at least take some comfort that their star player didn’t use this opportunity to put himself in the shop window as some players sometimes do.