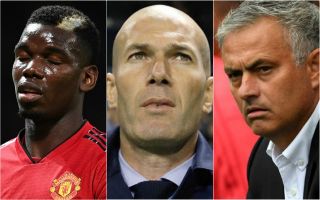 Manchester United are reportedly set to announce the sacking of manager Jose Mourinho imminently and replace him with Zinedine Zidane.

Sources in Spain have made the bold claim that star player Paul Pogba has been told by the club that he should stay put as they’re set to finalise the departure of Mourinho.

It’s been an open secret for some time that the pair do not get on, with Pogba struggling to find his best form under the Portuguese tactician.

With the team’s form dipping this season there has been plenty of speculation about Zidane coming in to pick up the pieces, and it looks like fans don’t have too long to wait now.

Don Balon suggest Mourinho’s days are numbered, with United facing difficult fixtures against Chelsea and Juventus next that may decide his fate.

On current form you wouldn’t back the Red Devils to win either of those matches, and that might be seen as the opportune moment for United to pull the trigger.

CaughtOffside revealed earlier this season that Zidane had already spoken to Pogba about the possibility of being offered the United job, and Don Balon suggest this development will keep the 25-year-old at the club.

Pogba had been strongly linked with Barcelona, Real Madrid and Juventus, but working under Zidane could be a game-changer for him and the rest of the team, bringing them far closer to rivals Manchester City and other top teams in the Champions League.