Ex-Chelsea midfielder Michael Essien is backing Jose Mourinho to turn things around at Manchester United despite his recent troubles.

The Red Devils are seven points off the pace in the Premier League title race after just eight matches of the new season, losing against Brighton, Tottenham and West Ham while also drawing with Wolves along the way.

Mourinho has come under intense pressure as a consequence of the team’s poor form and has been criticised by experts and supporters for his negative tactics, team selection and treatment of his players.

According to Talk Sport, Zinedine Zidane is being lined up to replace the Portuguese boss in the hot seat at United and with a crunch fixture against his former employers Chelsea at Stamford Bridge to come on Saturday, his situation could get all the more desperate very soon.

However, Essien insists the 55-year-old coach is still the right man to lead United, having seen first hand how the manager works during his spell with the Blues as a player between 2005 and 2007. 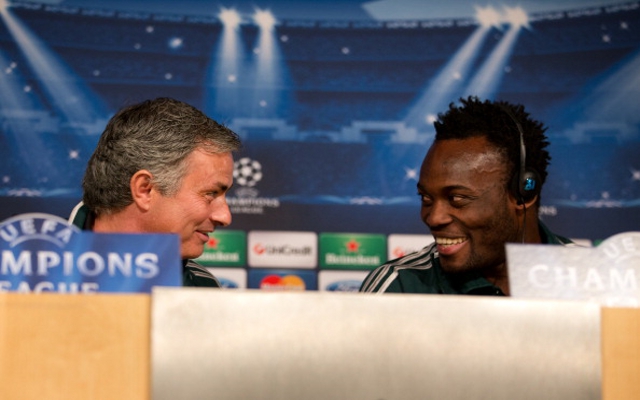 “He is just a great manager and I know that he has been having a bit of a tough time in Manchester, but knowing him I think he is going to turn it around,” The former Chelsea star told the Daily Mirror on Tuesday.

“I am backing him because I am still going to be his No.1 fan!

“I have to back him to turn things around and it is a difficult situation but I am sure that he can do it.”

A 3-2 comeback victory against Newcastle before the international break earned Mourinho a stay of execution at the Theatre of Dreams but his team must build on that result with a strong performance against the Blues this weekend.

Maurizio Sarri’s men are joint top of the Premier League alongside Liverpool and Manchester City at the moment, with star player Eden Hazard tearing apart defences for fun as part of an exciting new set-up under the Italian coach.

Mourinho must outwit his rival on the touchline at The Bridge or else face even further questions about his job, but he certainly has the experience and tactical knowledge to mastermind a famous Red Devils victory, so it may be slightly premature to write him off just yet.