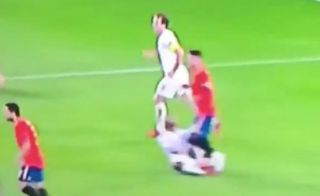 The Manchester City forward was in lethal form last night, scoring twice for England in their 3-2 win away to Spain.

This perhaps angered Ramos, who took a moment to go over to him and leave his foot in while Sterling was on the ground.

MORE: ‘Liverpool legend’ – These Liverpool fans loved what Eric Dier did in England’s win over Spain

The Los Blancos defender is known for being a fiercely competitive performer on the pitch, so these antics are nothing new from him really.

The only question is now did the referee not spot it and take action?

How has no one picked up on Ramos purposely going to stamp on sterling #ESPENG pic.twitter.com/QIjvjHDDBU