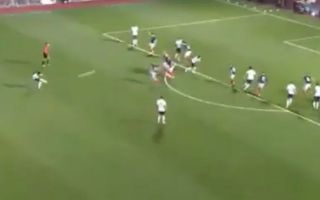 As he continues to try and impress on his loan spell with Hoffenheim, Arsenal starlet Reiss Nelson sent a message to the Gunners with a stunning free-kick for England U21s on Tuesday night.

The 18-year-old is busy looking to make his mark in Germany this season during his loan spell with Hoffenheim, and he’s certainly made a positive start with two goals in four games.

He took that confidence into England’s encounter with Scotland on Tuesday night, and as seen in the video below, he produced a sensational strike from 30 yards out as his free-kick sailed into the back of the net.

The Young Lions had already secured their place in next summer’s Euro Finals in Italy, but sealing a victory over Scotland this week means that they finished eight points clear of the Netherlands in their qualifying group.

With finishing like this, it could be a fun summer next year for Aidy Boothroyd and his players…

? What a free kick by Reiss Nelson! pic.twitter.com/PoLwHM2Ykf