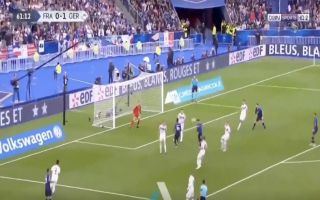 The 27-year-old latched onto a superb cross from the left-hand side of the pitch from club teammate Lucas Hernandez and guided the ball into the net with his head past a flailing Manuel Neuer.

The Germans took the lead early in the fast half through a Toni Kroos penalty kick, but Griezmann’s goal has drawn the World Champions level with plenty of time left on the clock.

The Stade De France is rocking after the Atletico talisman’s sensational effort and French supporters will be hoping the team can go on to steal another goal before the end.