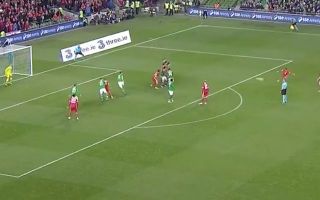 Liverpool loanee Harry Wilson was at it again as he scored a sensational free-kick for Wales in their clash with the Republic of Ireland on Tuesday night.

The 21-year-old produced a similar moment of magic for Derby County in their League Cup clash with Man Utd last month, as he’s bagged two goals and an assist in nine outings for the Rams on his loan spell from Liverpool.

Not content with making a positive impact at club level, he re-produced his magic from a dead-ball situation for Wales in their clash with Ireland with a superbly struck free-kick on the edge of the box, as seen in the video below.

With Gareth Bale sidelined, the youngster showed that he can step up and deliver when needed and even showed off a similar technique to his compatriot.

Importantly though, he managed to find the back of the net and give Wales the lead in their UEFA Nations League showdown.

As for Liverpool, they’ll certainly be keeping an eye on his progress this season, and goals like this one will undoubtedly grab their attention and help to convince Jurgen Klopp that the Welshman has a future at Anfield.

Weeks after his Old Trafford heroics, Harry Wilson has done it again as he hits an absolute rocket for Wales against Ireland! ?