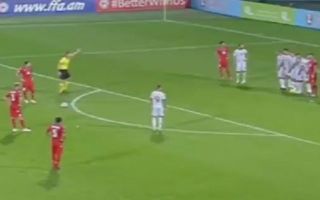 Arsenal playmaker Henrikh Mkhitaryan will seemingly return to club duty this week full of confidence after playing a starring role in Armenia’s win over Macedonia on Tuesday.

In great news for Gunners fans, the 29-year-old looked in top form as he provided two assists before curling his free-kick into the back of the net late on, as seen in the video below.

SEE MORE: Arsenal fans will not like Olivier Giroud’s latest comments about Chelsea

Mkhitaryan has provided three assists and scored one goal in eight appearances for Arsenal so far this season, but with a crucial run of games coming up which will test Unai Emery’s squad in terms of their depth and quality to compete on various fronts, they’ll need their creative ace in top form.

Based on his impact for Armenia on Tuesday night, he looks in confident mood and he’ll be desperate to establish himself as a prominent figure for the Gunners between now and the end of the season.

If he can take this kind of form with him back to the Emirates, he’ll certainly be decisive for Arsenal. Emery will be hoping that starts when they face Leicester City at the Emirates on Monday night.

#Mkhitaryan wraps up with a goal? in free kick for Armenia ? Still not bringing him in for #GW9? But gotta admit the opponent team GK is having #Karius moment?#NationsLeague #ARMMKD #Macedonia #ArsenalFC #FPL #GW9 pic.twitter.com/DbouSiQZGF

Iwobi impressing again for Nigeria, playing a defence-splitting through ball in the build up to their first goal. Great to see him in such fantastic form.

Meanwhile, Mkhitaryan scored one and assisted two in Armenia’s game earlier. The Arsenal boys are full of confidence.