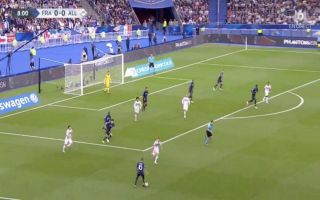 Paris Saint Germain winger Kylian Mbappe flew down the right wing during France’s 2-1 win against Germany on Tuesday night in a jaw-dropping moment.

The 19-year-old sensation picked the ball up in his own half and sprinted at full pace down the right-hand side of the pitch, before picking out Olivier Giroud for a neat one-two, which he latched onto deep in opposition territory.

The PSG superstar’s final ball was lacking as Germany got the ball away, but his incredible speed on the break was breathtaking to witness and further served to underline his immense talent at such a tender age.

France won 2-1 on the night thanks to a brace from Antonie Griezmann, to secure three valuable points in the UEFA Nations League.

Check out Mbappe’s sensational run below via social media: