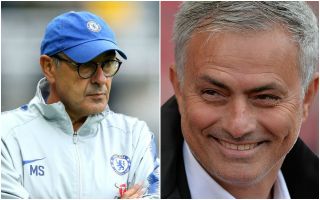 Chelsea manager Maurizio Sarri has been given a warning of sorts by pundit Jamie Carragher as his side prepare to take on Manchester United in the Premier League.

Although the Red Devils are not in great form at the moment, Mourinho has often shown himself to be superb at nullifying the threat of big teams when it comes to important matches.

The Portuguese has arguably built his career on defensive strength and frustrating opponents who play a certain way, even if he’s slightly lost that touch in recent years.

Carragher feels this could be a big test for Sarri at Chelsea, even though he also concedes there is a huge amount of pressure on Mourinho at the moment ahead of some big fixtures for United.

‘I think there’s definitely a run of fixtures in the next three or four weeks before the next international break for Manchester United and Mourinho where all eyes will be on them,’ the former Liverpool defender told Sky Sports.

‘It’s their first real big away game against the rest of the top six. The reason you bring Jose Mourinho to your club is to win the big games.

‘He’s been a master at that throughout his career.’

He added: ‘We talk about Manchester United but for Chelsea also this is a big test.’

MUFC take on Chelsea at Stamford Bridge this weekend and must then host Juventus at Old Trafford in the Champions League on Tuesday evening.

Given that they’ve won just one of their last five games, it will take something pretty special from United to ensure they come through this tough patch unscathed.