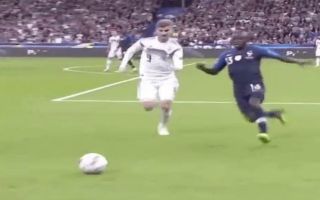 France beat Germany 2-1 on the night thanks to a brace from Antoine Griezmann, but Kante was once again the unsung hero for his country in midfield.

The Blues stalwart goes about his business with great professionalism and thought at all times with his industry in the middle of the park, which has earned him his status as one of the world’s finest players.

When Werner threatened to score in the second half for the Germans, Kante blocked his goalbound effort on the edge of the box, before beating him to the loose ball and shoving him out the way with an amazing show of strength.

Kante may be small in stature, but he has proved time and time again that he can mix it with anyone with his tenacious and aggressive style of play.

Check out the latest example of that below, via Twitter, with a few comments from supporters lauding their favourite Chelsea superstar:

guess who wins in a 50/50 shoulder challenge? ???? pic.twitter.com/6ACnRuSrYV