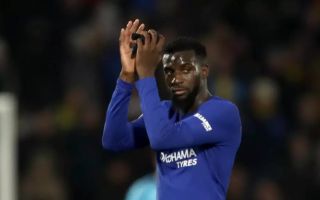 Chelsea loanee Tiemoue Bakayoko hasn’t enjoyed the best of starts at AC Milan, which in turn led to speculation he may return early.

As noted by The Mirror, it had been suggested that the 24-year-old could return to Stamford Bridge just months after leaving to join the Italian giants on a season-long loan deal.

It comes as Bakayoko has struggled to make a positive impact at the San Siro thus far. From failing to impress off the bench in Serie A to his two average displays in the Europa League, the former Monaco ace is still battling to rediscover the form that he displayed in Ligue 1 which warranted his move to Chelsea in the first place.

Sky Sport Italia note that Lucas Paqueta is expected to arrive at Milan in January, and although the pair are different type of players for Gennaro Gattuso’s midfield, there is a case as to why the Serie A outfit would potentially opt to send Bakayoko back.

However, a key figure in the deal that took him to Italy has now suggested that reports of an early return to London are untrue and that the midfielder will remain with Milan until the end of the season.

‘Bakayoko is happy in Milan and Milan is happy with him,” Federico Pastorello is quoted as saying by Calciomercato. “It was known that it would take some time, but everyone believes that he can make a big contribution to the season of the Rossoneri. So any rumours about his return to Chelsea in January are completely unfounded.”

While that potentially clears up Bakayoko’s more immediate future, it remains to be seen if he can do enough in the coming months to convince Milan to turn his loan spell into a permanent move, with an option included in his deal.

Based on what we’ve seen thus far, the French international may struggle which could give Chelsea an unwanted headache of having to decide what to do with him next as he seemingly can’t find a way to get back to the player he was at Monaco.

Nevertheless, it’s still early in the season and so time will tell if Gattuso and Milan can get the best out of him.