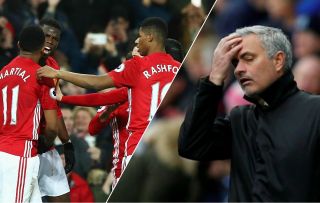 Man Utd could reportedly come under pressure to keep Marcus Rashford at Old Trafford amid speculation that Juventus are plotting a move for the attacker.

The 20-year-old hasn’t quite managed to hit the heights expected of him after his break-out season in 2015/16, despite featuring regularly under Jose Mourinho.

From eight goals in 18 appearances in that first season in the senior side, Rashford has managed just 24 goals in 105 outings over the last two campaigns which will surely be a disappointment for him.

With that in mind, a reported £65m bid from Juventus as per The Sun could be a tempting offer for the Red Devils to cash in, but much will depend on whether or not Mourinho believes that he can get the best out of the England international on a consistent basis moving forward.

Given that he is still so young, it would surely be a mistake to consider an exit at this stage of his career and so patience and time is needed to allow him to flourish at United in the coming years.

Having established himself as a key figure for club and country, Rashford must now add a clinical edge to his play to be more decisive. However, that is surely not enough of a current concern to suggest that Man Utd would consider offers for him.

It’s questionable as to where he would fit in at Juventus too, given coach Massimiliano Allegri already has a wealth of options in attack at his disposal.

With Cristiano Ronaldo, Paulo Dybala, Mario Mandzukic, Douglas Costa, Federico Bernardeschi and others in his squad, Rashford may find himself down the pecking order if a move to Turin did materialise. Albeit, he does offer a long-term solution and so could be eyed as an eventual replacement.

Nevertheless, it would surely be a surprise for many if United did green light an exit for their homegrown star…