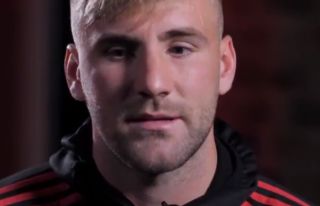 Manchester United left-back Luke Shaw has sent a special message of thanks to the club’s fans after signing a new contract.

BBC Sport and others are reporting this as a new five-year deal, which looks a deserved reward for the England international after his big improvement in form this season.

MORE: Manchester United ready to do what it takes to clinch transfer of £195million goal machine

Shaw has been one of the club’s best players this term despite United generally struggling overall, and he’s been keen to think Red Devils fans for always standing by him in difficult times.

Shaw has had to cope with being in and out of the team after a career-threatening injury a couple of years ago, but has remained popular among the Old Trafford faithful.

It's official – congrats to @LukeShaw23 on his new #MUFC contract! ??

Watch his exclusive interview in full via our free official app…

He also followed that up with this tweet later…

Current scenes. So proud to have signed a new deal! I'll continue to do all I can for you guys and repay the faith the fans and club have shown in me. #MUFC pic.twitter.com/a57eLY0D7q