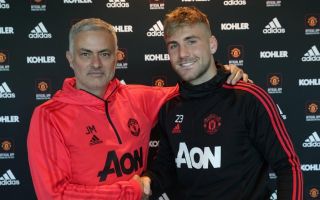 Manchester United manager Jose Mourinho has spoken about Luke Shaw after the left-back’s new contract with the club was announced today.

It hasn’t always been plain sailing for the England international at Old Trafford, with the defender often one of the players most often singled out for criticism by Mourinho.

Shaw has started this season much improved, but it’s easy to forget that just a few months ago Mourinho dragged him off in an FA Cup game against Brighton and slammed his performance, as reported at the time by beIN Sports.

This was just one of a number of occasions in which the Portuguese seemed to quite harshly single out Shaw, but he’s now suggested the player has responded well to this kind of approach.

Speaking today, Mourinho praised Shaw for understanding the ‘development process’, which is perhaps also a little reminder to other under-performing stars that they need to take criticism on board.

While many fans and pundits increasingly seem to feel Mourinho is losing his touch because of publicly bashing his players, it’s worth noting that he is one of the most decorated managers in the game and has been praised for his tough approach in the past.

It seems it’s finally worked with Shaw, and fans will be delighted to see his improvement rewarded today.

?? "I am delighted that we are keeping such a talented young English player with a bright future ahead of him."