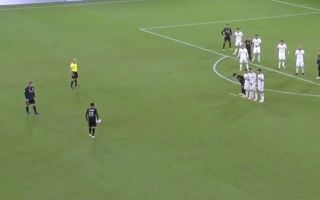 Wayne Rooney continues to deliver for DC United, and his form has some Man Utd fans calling for the stalwart to return to Old Trafford.

The 32-year-old is undoubtedly enjoying himself in MLS, as he bagged his 10th goal of the season in a 1-0 win over Toronto FC.

And it was a beauty, as seen in the video below. Rooney bent a superb effort over the wall and into the back of the net as he continues to lead DC United’s charge for a playoff spot.

While there is of course a huge difference in terms of quality and competitiveness in the Premier League and Stateside, the pressure is also arguably off the former England international now, it didn’t stop the Man Utd fans below from wanting to see their club legend make a return.

It seems highly unlikely that Jose Mourinho would even consider a January loan deal during the MLS offseason, but based on his form so far this year, it’s difficult to see Rooney not getting offers from around Europe to temporarily return…

@WayneRooney @ManUtd can we get him back already. The passion the desire is everything that’s missing at old Trafford! https://t.co/aH24902poQ

Wazza! What a Goal!
The Main Man, the Legend, the Hero.
He goes by the name of Wayne Rooney!
Get @WayneRooney back home @ManUtd from @dcunited#WayneRooney #DCU #MUFC https://t.co/lpa8WeU5c7

What a goal, born again over there. How @ManUtd could do with his character at the moment @WayneRooney well done lad.

Wish he was still at United!! Been a few players over the last few years that we should have held onto and he tops the list. Definitely missing him this season.