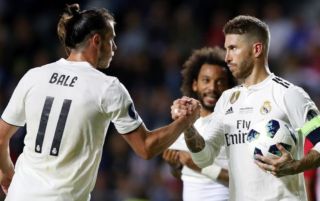 Real Madrid boss Julen Lopetegui will be desperate to see his side get back to winning ways this weekend, and he could be handed a major boost on the injury front.

The reigning European champions are winless in their last four outings in all competitions, losing to Sevilla, CSKA Moscow and Alaves while being held to a draw by city rivals Atletico Madrid.

To make matters worse, they have failed to score a single goal in that run of games, and so the pressure has unsurprisingly mounted on Lopetegui and his players to turn things around and start delivering.

With that in mind, he will be hugely buoyed by the fact that Gareth Bale, Isco, Karim Benzema and Marcelo have all returned to training this week amid respective injury troubles, as noted by AS.

Aside from Isco’s creativity in the final third and Benzema’s ability in the box, Bale is arguably the biggest boost given he has bagged four goals and three assists in just nine games so far this season.

In turn, his presence in attack could be crucial against Levante on Saturday, as he’ll be hoping to continue to prove that he can fill the void left behind by Cristiano Ronaldo after his summer exit.

Time will tell if he is passed fit along with his trio of teammates, but Lopetegui will certainly be hoping that they can feature at some point to give his side a much-needed lift ahead of a crucial run of fixtures both domestically and in Europe to prove that they can compete on multiple fronts this year.