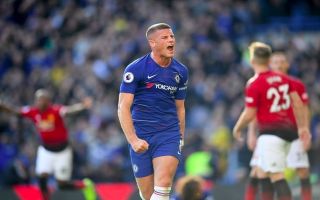 Ross Barkley scored with one of the last kicks of the game, the last-gasp equaliser was full of drama, sparking a melee between Jose Mourinho and Chelsea coach Marco Ianni.

Barkley was on hand to capitalise for the Blues after Antonio Rudiger’s header was saved by David De Gea.

The goal was the latest that United have conceded since 2009 when David Ngog scored at the same time against the Red Devils.

Check out the interesting record courtesy of Opta below:

95:27 – Ross Barkley's goal was the latest Man Utd have conceded in the Premier League since October 2009, when David Ngog also scored against them at 95:27 for Liverpool. Drama. #CHEMUN pic.twitter.com/pxrpCAuvVz

Ross Barkley’s goal equalled an unlikely record and also proved to Premier League fans that the former Everton man is back to his best under new Chelsea manager Maurizio Sarri.

Barkley’s resurgence was noticed by England manager Gareth Southgate who recalled the attacking midfielder to his Three Lions squad in the most recent international break.

Barkley is beginning to look like one of the surprise packages so far this season.