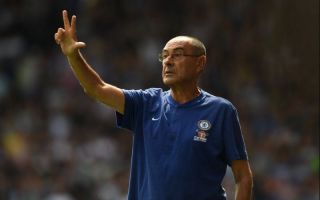 Chelsea boss Maurizio Sarri remains hopeful that he will have positive injury updates ahead of his side’s encounter with Man Utd at Stamford Bridge on Saturday.

The Blues have been in fine form so far this season, winning six of their opening eight Premier League games to sit joint-top of the standings alongside Man City and Liverpool.

It’s been particularly impressive given that Sarri has managed to successfully get his ideas across so quickly, as the contrast between his methods and style of play is day and night compared to those of compatriot and predecessor Antonio Conte.

Having already passed one major test with a draw against Liverpool prior to the international break, the Italian tactician faces another this weekend with Jose Mourinho and United visiting west London.

In order to have the best possible chance of extending their unbeaten start and continuing to set the pace at the top, Chelsea will be desperate to have as close to a fully-fit squad as possible.

Sarri isn’t expected to get that, but as noted by The Daily Star, he suggested on Friday afternoon that both Antonio Rudiger and Mateo Kovacic could provide him with a huge double boost and return for the game after struggling with injuries over the international break.

Nevertheless, having Rudiger and Kovacic back will arguably be enough of a boost, as the former has played a fundamental part in ensuring Chelsea have had one of the strongest defences so far while Kovacic is fundamental to Sarri’s possession-based style of play with his technical quality in midfield.

Time will tell if both get the green light to play after Sarri noted in his press conference that they had returned to training and are likely to be in contention.