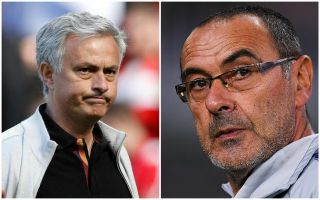 Chelsea host Man Utd at Stamford Bridge in the early kick-off on Saturday, with Maurizio Sarri and Jose Mourinho both hoping for a winning return after the international break.

The Blues undoubtedly go into this encounter with confidence as they currently sit joint top of the Premier League table, winning six and picking up two draws after eight games.

As for United, their stirring comeback win over Newcastle United a fortnight ago will be likely be seen as a potential turning point in what has been a tumultuous and disappointing campaign thus far.

With Mourinho returning to his former club, he’ll be hoping to put an end to United’s run of four consecutive defeats away from home against the Blues in all competitions.

It won’t be easy given the results and performances that the hosts have been producing so far this season, but time will tell if the Portuguese tactician can get the better of Sarri on this occasion as both men have had injury concerns over the break.

However, they’ve put out strong starting line-ups which in turn should result in an entertaining encounter with two sides with lofty ambitions this season.

It’s good news for both managers though, as after there were doubts lingering over Antonio Rudiger and Mateo Kovacic, as noted by the Daily Star, both are included in the Chelsea XI.

Meanwhile, as per the Evening Standard, Luke Shaw and Nemanja Matic were two concerns for Mourinho, but they’ve both also got the nod from the United boss to start the game.