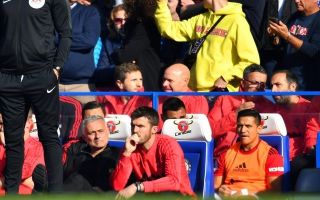 According to a report from The Sun, Alexis Sanchez returned from international duty with Chile by travelling directly to London leaving Manchester United unable to assess the star’s condition heading into today’s game.

Sanchez played the full 90 minutes for Chile when they faced Mexico earlier this week and decided to fly directly to London, meaning that he missed training with the United team.

“Alexis came directly from Mexico to London, he didn’t even go to Manchester, we didn’t even know his condition.”

“But that is the way it is, that is international football.”

Sanchez joined United in the January transfer window from Arsenal and has so far failed to live up to fans’ high expectations.

Sanchez has only started 4 games for the Red Devils this season, scoring only one goal.

Mourinho looks to have a big problem in his hands with Sanchez. The Chilean isn’t in his best form but United need to play the 29-year-old in order to try and prove that their marquee investment was worthwhile.

It seems that the 29-year-0ld’s ability may be starting to decline and with Anthony Martial in fine form against Chelsea earlier, the Chilean’s future at Old Trafford could come under question soon.

“Mata is Mata, he’s one of our team players, he’s always available for the team, thinks about the team, he’s not selfish or egocentric.

“Sometimes he starts, sometimes from the bench. He’s a proper professional.”

It seems like Sanchez needs to change his attitude very soon or his time at United will stand out as a ‘flop’ when he looks back on his otherwise successful career.