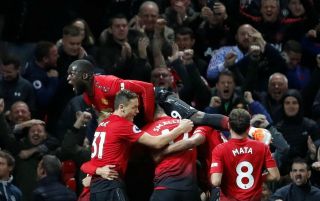 Man Utd face Chelsea at Stamford Bridge in the early kick-off on Saturday, and Jose Mourinho will be desperate to come away with a positive result.

Despite their stirring comeback against Newcastle United prior to the international break, the Red Devils remain in eighth place in the Premier League table, five points adrift of the top four.

SEE MORE: Jose Mourinho reveals which Chelsea star he would love to have at Man Utd

Further, they’ve conceded 14 goals in just eight league games, leaving them with the joint-worst defensive record out of the top 16 sides in the standings.

Given Chelsea have been in fine form in general but also in front of goal, it raises concern from a United perspective over their ability to secure a result, but they’ve seemingly been handed good news ahead of the showdown.

As per The Express, Nemanja Matic, Ander Herrera and Luke Shaw were all snapped travelling with the squad after suffering with respective injury problems over the past fortnight. However, given that they’re part of the group, it’s expected that they will all be available to feature.

Further, as seen below, the Express have provided an idea of the squad that could face Chelsea based on those who were spotted at Stockport station, although there are still question marks over certain individuals who were missing but could yet play a part.

Mourinho will be hoping for as much positive news on the injury front as possible given the task ahead of them against Maurizio Sarri’s side, while they also have the small matter of facing Italian champions Juventus in the Champions League at Old Trafford on Tuesday night.

With that in mind, getting back as many injured stars as possible will be crucial to their chances of being able to compete across the board and to ensure that their win over Newcastle was the start of a resurgence. and not merely a temporary respite from the barrage of criticism that they’ve faced so far this season.