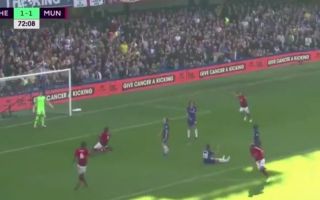 Manchester United fans have taken to Twitter to express their love for Romelu Lukaku’s celebration for their second goal in the Red Devils’ 2-2 draw with Chelsea at Stamford Bridge.

United fell behind in the first half due to a header from Antonio Rudiger, however the away side soon found themselves 2-1 ahead in the second half thanks to a brace from French winger Anthony Martial, with United going on to draw with Maurizio Sarri’s side due to a last-minute Ross Barkley goal.

And it was Martial’s second goal that had a lot of United fans expressing their joy on Twitter, although it wasn’t to do with the Frenchman.

For Martial’s second strike, Lukaku’s celebration is the thing that has a lot of fans talking, as the former Chelsea man celebrated in front of the Blues supporters, sliding on his knees in the process.

This would be seen by some as Lukaku being disrespectful, seeing as he used to play for Chelsea a few years ago, however United fans certainly didn’t think this, as a lot of them flocked to social media to express their love for the Belgian international’s celebration.

Here are a few select tweets from fans showing their love for Lukaku’s celebration for Martial’s second goal this afternoon.

You’ve got to respect his passion, to be fair…

Ice cold finish from Martial. Unbelievable. Lukaku’s celebration is everything, too.

Lukaku’s celebration was everything!!!

Lukaku with that sliding celebration in front of Chelsea goal was ?