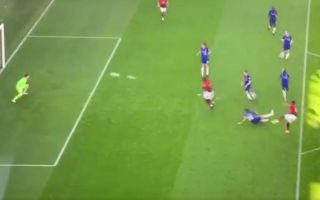 Man Utd turned their clash with Chelsea on its head with Anthony Martial bagging a second-half brace to give them the lead at Stamford Bridge.

Antonio Rudiger had broken the deadlock for the Blues in the first half, but Jose Mourinho seemingly sent his players out with added confidence after the interval.

Coupled with some clinical finishing from Martial, they were able to turn things around as the Frenchman bagged an impressive brace to give his side the lead.

While the first was from close range, the second was a brilliant strike from further out as he curled his effort past Kepa Arrizabalaga who was left hapless as he watched the ball nestle into the back of the net, as seen in the video below.

That’s now three goals in his last two Premier League outings, as Martial’s quality is certainly making the difference for the Red Devils who looked a real threat on the counter attack while also taking advantage of some poor defending…

Great finish by Martial after this poor first touch pic.twitter.com/yxLm0nyTG9

anthony martial withdrew his sword and stunned kepa with the sharpness of his blade pic.twitter.com/LOm8zk14O7

How about that for a finish! ?@ManUtd have turned it around at Stamford Bridge! ?