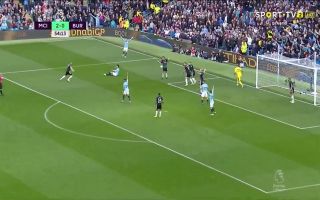 There was controversy surrounding Manchester City’s second goal against Burnley in this afternoon’s Premier League encounter.

In the 54th minute of the tie wing wizard Leroy Sane was brought down in the Burnley box leading to penalty appeals from City, the referee decided not to point to the spot but City controversially continued the play.

The goal will certainly be a hot topic for conversation in the coming days, the referee should have had a much better grip on the situation.

Check out the controversial goal below:

To rub salt into the Burnley wounds it appears from video replays that the ball crossed the line and was out of play when David Silva passed the ball into Bernardo.