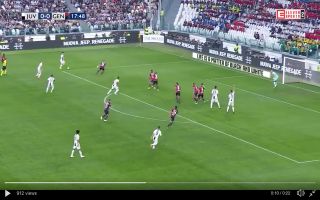 Cristiano Ronaldo scored his fifth goal of the season for Juventus this evening against Genoa in the 18th minute of the Serie A clash.

Juventus’ Joao Cancelo picked up a loose ball from a Juventus corner before beating a defender and charging forward, the right-back cut in on his right foot before firing off a shot which was blocked.

Cancelo’s blocked shoot seemed to confuse both the Genoa goalkeeper and the defence with the goalkeeper and a Genoa defender failing to clear the ball, leaving Ronaldo to tap the ball into the empty net after Genoa’s disastrous defensive mixup.

Genoa’s defenders will be kicking themselves after seemingly gifting a goal to Juventus.

See More: How AC Milan could line up vs Inter: No risks from Gattuso, full strength XI touted

Ronaldo will be hoping to take his goalscoring fortunes for Juventus into Tuesday evening’s mouthwatering Champions League clash when he faces off against his former side Manchester United at his old stomping ground, Old Trafford.