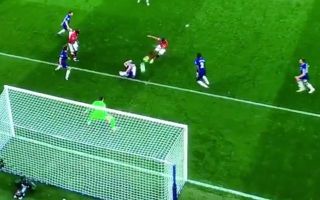 Anthony Martial provided the perfect early response in the second half for Man Utd as he struck to draw them level against Chelsea at Stamford Bridge.

Antonio Rudiger had given the hosts the lead in the first half, with question marks over the United defending from the corner as the German international was allowed a free header.

However, it was Chelsea’s turn to ask questions of their backline after the interval, as after failing to clear their lines after a top initial save from Kepa Arrizabalaga to deny Juan Mata, the ball eventually found its way back into the box.

With little time to react after a deflection off Jorginho en route to him, Martial killed the ball with his first touch and lashed home the finish with his second as he took his opportunity really well, as seen in the video below.

It was exactly the lift Man Utd needed early in the second half to get themselves back into the game, and that’s now two goals in his last two Premier League outings for the French forward after his effort against Newcastle United last time out.

50M down the drain as Toni martial scores again pic.twitter.com/rwbkIgbtKG

He's fired the visitors levelled as this game sparks back into life! ?