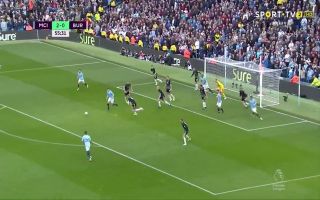 Manchester City were in fine form against Burnley in this afternoon’s Premier League encounter and midfielder Fernandinho added to the scoreline with a sensational strike in the 56th minute.

The ball spilled out of the box into the path of Fernandinho after a corner and the Brazilian produced a wonderful side-foot finish on the edge of the box which flew into the top corner.

Joe Hart was rooted to the spot and could only watch helplessly as the ball hit the back of the net. This will certainly go down as one of the best goals Fernandinho has scored during his time at City.

Check out Fernandinho’s wonderful strike below:

City’s 3rd goal came only 1 minute and 56 seconds after Bernardo Silva’s controversial second for the side.

Pep Guardiola’s men look as fierce going forward as they were last season which will worry rival fans who are hoping to stop City in their tracks when it comes to defending their Premier League title.