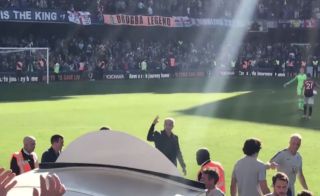 The away side were denied all three points thanks to a last-minute strike from Ross Barkley, with a lot of Blues fans at the stadium reportedly sending chants towards their old manager Mourinho at full time.

MORE: Video: Furious Jose Mourinho held back by stewards after being provoked by Chelsea staff member

Mourinho was quick to respond to these chants, as he showed the Chelsea fans three fingers, which is thought to signify the three Premier League titles he has won during his time at the club previously.

A video of the incident can be found below, one that we’re sure won’t put Mourinho in many Blues fans’ good books.

Wait for it. Jose Mourinho holding up three fingers (to signify 3 titles at #CFC) to the Chelsea fans after the game, moments after a huge melee and Manchester United let in a 95th minute equalizer.

Jose Mourinho holds three fingers up at the Chelsea fans who gave him abuse at full time. #mufc pic.twitter.com/5NvdGKgWsF