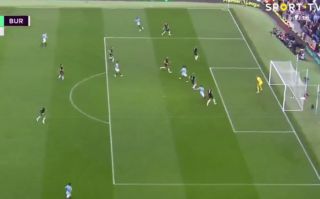 Benjamin Mendy and Leory Sane combined brilliant this afternoon for Man City, as the German scored his side’s fifth in their 5-0 rout against Burnley at the Etihad.

City were already four goals up thanks to strikes from Sergio Aguero, Bernardo Silva, Fernandinho and Riyad Mahrez before Sane’s goal.

MORE: Video: Controversy as Bernardo Silva makes it 2-0 for Manchester City against Burnley

And it was the German’s combination play with Mendy that allow Pep Guardiola’s side to get their fifth very late on in the match.

The Frenchman’s swooping first-time cross found it’s way to Sane, who finished well to put the icing on the cake for the home side.

Here’s a clip of Sane’s goal. Him and Mendy’s link-up play at times is just wonderful…