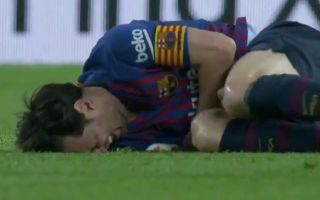 Lionel Messi was influential in Barcelona’s win over Sevilla on Saturday night, but he sparked major concern after being forced off due to an arm injury.

The 31-year-old had bagged his 12th goal of the season as Barcelona secured a 4-2 win over their rivals to go top of La Liga, but he didn’t last much longer.

After finding the back of the net in the 12th minute, he had to be replaced in the 26th minute as he fell awkwardly on his arm and was visibly in a huge amount of pain as he remained on the ground, as seen in the video below.

The Catalan giants have now released an official statement to update fans on Messi’s condition and the severity of the injury, and have confirmed that he will be ruled out of action for three weeks, as per the tweet below, due to a bone fracture.

With their Champions League clash with Inter on Wednesday night and then El Clasico next weekend, Barcelona will be desperately disappointed to see their talisman ruled out but will be hoping that he can make a speedy and full recovery.

#Messi replaced after a nasty fall…?

? [INJURY NEWS] Tests carried out on the first team player Leo Messi have confirmed that he has a fracture of the radial bone in his right arm. He will be out for approximately three weeks. #FuerzaLeo pic.twitter.com/kpNcspnfqo