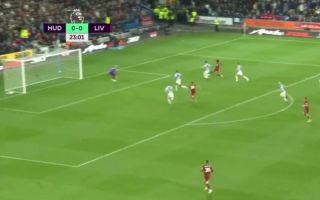 Mohamed Salah scored his first goal in four games this evening, as he put Liverpool 1-0 up against Huddersfield as the John Smith’s Stadium.

Salah hadn’t scored in four games prior to the Reds’ match against the Terriers this evening, however the Egyptian international ended that barren run with a fine finish.

The former Chelsea man was put through by summer signing Xherdan Shaqiri, as he poked the ball home with his weak foot from a tight angle to give the away side a 1-0 lead.

Here’s a clip of Salah’s goal, one that will surely do wonders for his confidence…