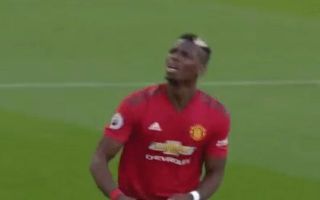 After losing his marker on a corner, Man Utd star Paul Pogba was accused of blaming Victor Lindelof after Antonio Rudiger had given Chelsea the lead.

It was a poor goal to concede all round for the visitors, as Rudiger was able to get into space and was given a free header as he powered his effort past David de Gea and into the back of the net.

However, replays showed that Pogba completely lost his man as he made a dart towards the near post and ultimately it was his fault for not being able to put up a better challenge to deny him such a great opportunity.

Unfortunately for the Frenchman, his misery didn’t end there as after it was suggested that he was blaming Lindelof after the goal was scored, as per Sky Sports’ tweet below, fans slammed him on Twitter for trying to deflect blame elsewhere.

It’s unclear as to whether or not that was actually what he was doing or if he was merely disappointed with being at fault for the goal, but that hasn’t stopped the reaction below…

He seems to be pointing the finger at Victor Lindelof for blocking him at the corner…?

What is Lindelof supposed to do lol?

Lindelof was doing his job unlike Pogba

Won’t admit his mistake. Not a team player.

This is how pogba blamed sissoko in the Euro finals. Lindelof was doing his job

He wasn’t blocked he was day dreaming and Rudiger got away from him ?