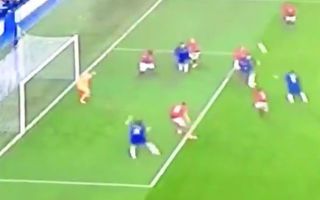 Chelsea took the lead against Man Utd at Stamford Bridge on Saturday as Antonio Rudiger put the hosts ahead with Paul Pogba losing his marker.

The hosts began brightly as they look to extend their impressive start to the Premier League campaign under Maurizio Sarri.

It took just 21 minutes for them to break the deadlock, with Rudiger finding himself in space and with a free header to find the back of the net to open the scoring.

Replays suggested that it was Pogba who lost his man on the corner, as seen in the video below, and he arguably should have done better to put up a challenge against the German defender.

However, as per Sky Sports’ post below, it’s also been suggested that the French international may well have been blocked off by a teammate as he tried to get to his man as he looked bitterly disappointed over it.

Either way, Jose Mourinho isn’t going to be impressed with the manner in which they conceded…

It’s been a positive start from @ChelseaFC and they lead at Stamford Bridge! ?

Jose Mourinho will not be happy with the marking…?

He seems to be pointing the finger at Victor Lindelof for blocking him at the corner…?