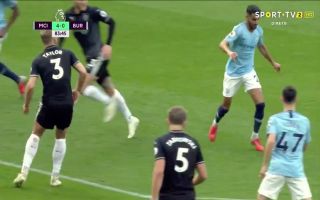 Manchester City were simply unstoppable against Burnley this afternoon, City turned on the style by putting five goals past Sean Dyche’s men.

In the 83rd minute of today’s match Mahrez got himself on the scoresheet with a wonderful curling effort. Manchester City briefly looked as though they would lose the ball after a poor pass backwards but the ball was recovered by Fernandinho.

Fernandinho then quickly played the ball into Mahrez who twisted and turned in front of the Burnley defenders creating just enough space to curl the ball into the top corner.

Joe Hart could only watch on hopelessly as the ball was curled into the top corner. It was certainly not a welcome return for the former Manchester City goalkeeper.

Check out Mahrez’s curling effort below:

Manchester City are now sitting 1st place in the Premier League table after their 5-0 victory against Burnley today.

Pep Guardiola’s men look as though they are on the warpath right now, it will be hard for any of the top sides to stop Manchester City from defending their Premier League title.