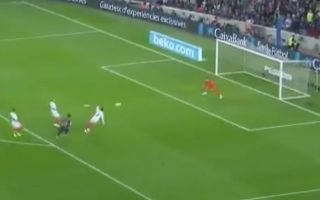 Lionel Messi bagged his 12th goal of the season as Barcelona secured a 4-2 win over Sevilla on Saturday night to go top of La Liga.

The Catalan giants had gone four games without a win in the league prior to the international break, being held to draws by Girona, Athletic Bilbao and Valencia while losing to Leganes.

In turn, the pressure was on to get back to winning ways against an in-form Sevilla side, and they certainly stepped up and delivered on a day which saw bitter rivals Real Madrid slip up yet again at home to Levante.

Naturally, in such a high-scoring encounter it was only right that Messi got his name on the scoresheet and he did it in style with a stunning finish, as seen in the video below.

The Argentine icon makes it look so easy at times as he scored his 12th goal in 12 games so far this season in all competitions, but there was concern later as he was forced off with a nasty looking arm injury which Barcelona will hope isn’t serious.

No prizes for guessing who grabbed it. His 25th against Sevilla. Barca heading top.
@FCBarcelona 2-0 @SevillaFC_ENG pic.twitter.com/ze0CfoFIHs