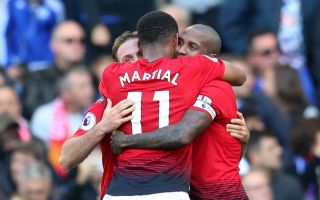 Manchester United forward Anthony Martial may have dropped a hint that he wants to stay at the club despite mixed transfer rumours and reports going around at the moment.

The France international scored twice in the Red Devils’ 2-2 draw with Chelsea yesterday, and celebrated with an Instagram photo of himself pointing at the club badge.

That looks like a hint he might be prepared to commit to United, despite RMC (with translation from Calciomercato) recently stating he’d rejected several offers of a new contract.

Elsewhere, the Metro claim Martial is in fact ready to sign a new deal instead of seek a transfer elsewhere after an up-and-down career at Old Trafford.

Make of this what you will then, folks…