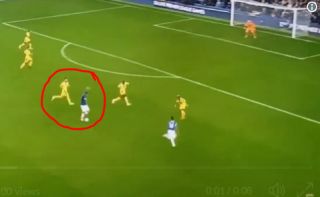 Watch the video below as Andre Gomes seems to get tackled by a ghost during Everton’s win over Crystal Palace.

Honestly, there’s no other explanation for this bizarre incident, in which the Portuguese midfielder simply falls over with no one really anywhere near him.

Gomes joined Everton from Barcelona this summer after a difficult spell at the Nou Camp and it doesn’t look like things are getting much better for him at Goodison Park.

Everton fans will just be hoping he can regain some confidence, fitness and match sharpness. Either that or banish whatever spirits are tripping him up in football matches…