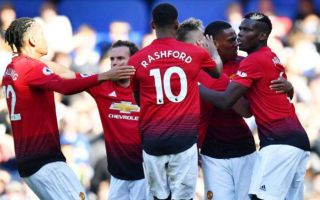 A number of Manchester United fans seem to have one major complaint about the Chelsea game on Saturday.

Despite a frustrating late equaliser from Ross Barkley preventing United taking all three points, the Red Devils generally gave a good account of themselves in this big game.

Anthony Martial was particularly impressive, scoring twice in the second half to put Jose Mourinho’s side on the brink of a big victory.

The France international’s display caught the eye in particular and it’s little surprise many MUFC fans are now calling on Mourinho to use him up front.

Especially as Romelu Lukaku’s goal drought went on with another poor performance, with a large number of fans on social media calling for the Belgian to be axed – while others being more generous towards him at least think he should be rested.

Could Martial or even Alexis Sanchez or Marcus Rashford get a run as a centre-forward? This lot think it would be worth a go, and it’s hard to argue, to be honest…

Lukaku was all over the place and the worst player in the team today.
?His movements were nothing near enough.
?He didn’t press Chelsea’s centre backs when they’ve the ball up the field
? He killed all the counterattacks opportunities when receiving the ball

Sanchez – Martial – Rashford front 3 Tuesday has to be. Martial down the middle he’s best finisher we have ??

Mou needs to be wise and drop lukaku for the juve game. Sanchez or martial as the lone striker will do

Martial scored the most goals since his debut get him upfront drop lukaku rapid! Haha

Sanchez up top and Lukaku right or bench. Need someone to hold tbe ball up and release it wide quick or we will never be good enough at counter attacking.

Love to see rashford through the middle and Sanchez and martial either side ??

Martial should be our striker, his finishing ability is 10 times better than Lukaku, Which allows Alexis on the left and Lingard or Rashford on the right, with mata at #10

Give lukaku a rest too.. play martial down the middle RT @Odd_Dizzy: Martial is a big game player.

I’d drop Lukaku for a bit and start Sanchez with Tony for a bit, see if we can get a partnership started. I do like Tony and Pogba together as well.

Play Martial, Sanchez and Mata front three against Juve on Tuesday. Sanchez in the middle. Martial and Mata on either side. Lukeskey needs to be dropped for a while.

We played with 10 men yesterday lukaku is so bad he honestly offers nothing hold up play doesn't comply with him, get Martial up top he's our best striker always has been get Alexis Rashford and Martial front 3 from now on let them gel, sell lukaku in the summer!!!!