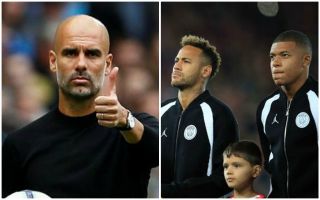 Manchester City manager Pep Guardiola is reportedly eager for his club to win the battle for the Neymar transfer against other elite sides in Europe.

The latest from Don Balon is that Real Madrid and Neymar’s old club Barcelona could also be in for the Brazil international, but City boss Guardiola believes he could be an essential signing to boost his side’s hopes of finally winning the Champions League.

The 26-year-old is undoubtedly one of the finest footballers on the planet and the kind of signing any top club would want to have, and it could really represent a big step forward for City.

Despite their domestic dominance, the Citizens have been unable to make much progress in Europe in recent times, being comprehensively beaten by Liverpool in last season’s quarter-finals.

This could be a blow for their rivals Manchester United, however, who were also recently linked with the Paris Saint-Germain front-man by Don Balon.

That piece states Neymar would have a clause allowing him to leave for around £195million next summer, which should be affordable for both Manchester clubs.

This could prove an intriguing battle between the two Premier League giants if they both step up their interest.