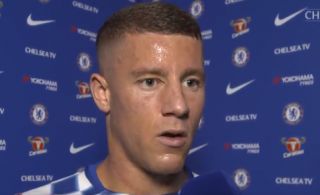 Chelsea midfielder Ross Barkley has revealed what manager Maurizio Sarri told him before bringing him on against Manchester United.

The England international continued his fine recent form by netting a late, late equaliser for the Blues, and he told Chelsea TV afterwards that Sarri told him to go on and make an impact, whether through a goal or an assist.

Barkley certainly took that on board, following up on some fine recent form for club and country.

The 24-year-old also scored in Chelsea’s recent win at Southampton, and shone in two appearances for England over the international break.

Watch his post-match interview below…

‘Luckily enough, I was in the right spot at the right time’ – @RBarkley8 ? pic.twitter.com/13Z6C5e4Fm