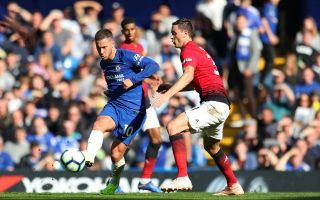 Chelsea could reportedly be without star player Eden Hazard for two games with a back injury after he received some rough treatment in the draw with Manchester United at the weekend.

The Blues were held to a 2-2 draw at home against United, with the in-form Hazard shackled pretty effectively by Red Devils boss Jose Mourinho.

MORE: 18-year-old Chelsea star being eyed up for £10M transfer swoop by Premier League side

Ashley Young did an admirable job at right-back for Mourinho’s side and kept Hazard very quiet, with the Belgian possibly now picking up an injury as a result of being singled out in that way.

The Telegraph report that the 27-year-old now looks a doubt for Chelsea’s upcoming games against Bate Borisov and perhaps even their next Premier League match with Burnley.

CFC will hope it’s not much more serious than that, and the report suggests it is not a big problem.

Still, with Hazard their top scorer so far this season in a fine start made by new manager Maurizio Sarri, they really can’t do without him for too long at all.

Chelsea have relied on Hazard for moments of magic to decide a number of games, with the likes of Alvaro Morata and Olivier Giroud really not pulling their weight up front.