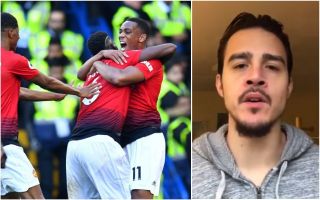 As flagged up by our friends at TalkChelsea, the French flop, on loan at AC Milan this season, seemed to take a little dig at his parent club by liking Martial’s celebration picture from the game at Stamford Bridge.

Martial scored twice in a 2-2 draw between Chelsea and United, and Goldberg was absolutely incensed to see Bakayoko disrespecting his team with his social media activities.

Watch his epic rant below – it’s fair to say he’s got a point, even though it probably was a bit more innocent than it seems, it certainly isn’t a great look by a player who should be doing much more to win over Chelsea fans after his disastrous form for the club since he joined.