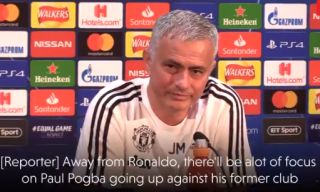 Here is a video of the bizarre moment Manchester United manager Jose Mourinho snapped at the tone of the questions in his press conference today.

The Portuguese tactician met the media ahead of his side’s game against Juventus in the Champions League tomorrow, but did not appreciate the focus on individuals.

Mourinho gave this response to a question from a reporter about United midfielder Paul Pogba, and also referenced the repeated questions from Spanish journalists about Cristiano Ronaldo.

The United boss wasn't impressed with some of the questions at his press conference this afternoon. #mufc pic.twitter.com/M6mOHpbZ00