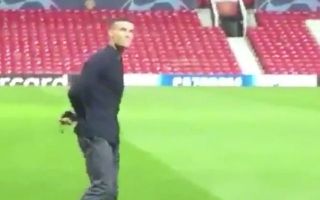 Ahead of his highly-anticipated return to Man Utd with Juventus, Cristiano Ronaldo took an opportunity to familiarise himself with Old Trafford on Monday evening.

The 33-year-old enjoyed a trophy-laden spell with the Red Devils prior to moving to Real Madrid in 2009, while he embarked on a new challenge this past summer when joining Juve.

He’ll hope to guide the Turin giants to a win on Tuesday night in their Champions League meeting to cement their place at the top of Group H, but it will undoubtedly be an emotional night for him given his connection and history with Man Utd and the fans.

While he will undoubtedly get a positive reaction from the home supporters, he was seen taking in an empty Old Trafford on Monday evening, as seen in the video below, as he’ll undoubtedly have plenty of great memories playing for the club.

However, once the game gets underway on Tuesday night, he’ll have to put all that sentiment to one side and deliver for his current employers and simultaneously pile further pressure on Jose Mourinho and his men.