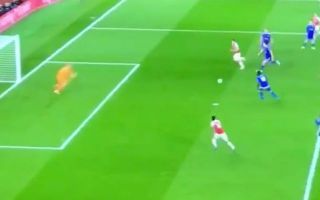 Arsenal striker Pierre-Emerick Aubameyang made an immediate impact off the bench as the Gunners cut Leicester City apart in the second half at the Emirates.

It took just two minutes for the Arsenal talisman to find the back of the net after being introduced by Unai Emery, as he applied the easy finishing touch after great play between Mesut Ozil and Hector Bellerin.

However, the best was yet to come from the hosts as they produced some marvellous football to carve Leicester open with some sublime play in the final third just minutes after taking the lead.

From Ozil’s flick and step-over to the unselfishness throughout to put it on a plate for Aubameyang to double his tally for the night. It was vintage Arsenal as they played some delightful football while showing great character to come from behind.

After a poor first half display, it was exactly the response that the fans and Emery would have been hoping for as they looked set to extend their winning streak.

It’s vintage Arsenal as they tear apart the Leicester defence to go 2 clear! ?

What a fantastic goal ?